Gosh, it feels good to say that! The crazy vortex which is the end of an academic year (especially when the grade/subject and school are all new to you) just sucked me in and swallowed me whole. Then, just when the light was appearing at the end of the tunnel (AKA summer vacation), shingles took hold. Yes, you read that correctly: just 3 days shy of that glorious last day of school, I ended up at Urgent Care and then my own doctor for confirmation. That patch of bumps rapidly appearing on my shoulder were in fact shingles. The couch became my closest friend. And to top it all off, the anti-virals prescribed to combat the virus which my poor weakened, end-of-school-year immune system just couldn’t muster the energy to fight ended up making me sicker. That’s right, despite my best efforts with the pharmacist and then nearly an hour on the phone with the manufacturer, the prescription still contained something that wasn’t Katie-safe. Such is the life for those of us with food issues. It was just quite an unpleasant reminder at an already unpleasant time.

However, that darkness is in the past and it’s onto better things. While shingles initially put a dent in any and all plans for the summer, providence ensued and actually brought about an opportunity to work in a summer school program I hadn’t even considered when someone backed out at the last minute. So it was off the couch and back to the classroom just this past Monday. I’ve been helping teach a class entitled “Toyology”. That’s correct. I spend my days exploring the physics behind Whoopee cushions, the polymers in Silly Putty, etc. Fun times. To top it all off, the Physicist boarded a plane this weekend for a science collaboration which will have him with an international address until Christmas; hence, the time for writing has returned. For the record, you have all been on my mind and I even have notes in my phone of blogpost topics and pictures. I’ll attempt to catch up on all of them in the coming weeks…but I also make no promises 🙂

Since summer is upon us, I thought I’d start with some delicious (and convenient!) summer food ideas.

1) Summer Salad Season is Here!: On these absurdly hot and humid summer days, the last thing you want to do some nights is turn on the stove. In addition, it seems wherever you go, everyone is enjoying a delicious summer salad. Part of you is excited: salad! Yes! Veggies, fruit, and maybe a protein: something I can safely consume! Until you stop and the following train of thought ensues: “Oh wait, there’s no way to know about those dressings. That’s OK, I can eat a dry salad. Oh but wait, I don’t know what they cooked that chicken in, or if that’s a safe brand of bacon for me to eat. Oooh, and I don’t know where those veggies were sliced, if some random croutons may have been in that bowl, or if some careless salad maker (or customer at a self-serve salad bar) inadvertently mixed the spoon or grabbed some cheese with the same tongs as the red onions.” If you’re like me, it’s around this point when you stop thinking and walk away, lest I journey deeper into the rabbit hole that is food anxiety. Just do yourself a favor: make a giant batch of salad on Sunday afternoon and you’re set for lunches until Wednesday. 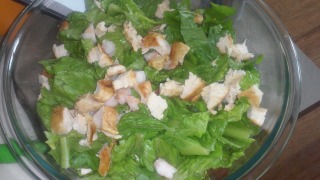 And for those of you who may be fortunate enough to have a safe salad bar to indulge in at work, steer clear of that dry salad. Make this dressing. It’s delicious, easy, and far cheaper than those all-natural (read: non-soybean/corn-syrup-containing) dressings at the grocery store.

2) Crab Cakes!: Keep in mind, I live in Baltimore…AKA a city which lives and breathes crabs in the summertime. Crab feasts, crab cakes, crab-flavored potato chips: we’ve got it all. Of course, when you’re a person who can’t consume bread crumbs, mayonnaise, or eggs, such a delicacy is quickly relegated to the “Danger, Danger” list. That is, of course, until a few weeks ago. I was navigating the aisles at Trader Joe’s just days before my shingles struck. My heart was light and my mind was dancing with thoughts of summer vacation, lazy mornings with my hot cup of coffee and the Today Show, and endless amounts of time to cook and write. I turned a corner and what did I see?? A sale on giant cans of crab meat!! I decided right then and there that this had to happen. The summer of 2015 would be Katie’s triumphant return to the land of crab cakes. And so it was.

1. Combine the crab meat, flaxseed, and water in a bowl.
2. Add mustard and mix.
3. Add coconut flour, Old Bay, parsley, cilantro and mix.
4. Squeeze in lemon juice.
5. Form crab cake patties with your hands.
6. Heat oil in a skillet (I used grapeseed) and pan-fry for 3-4 minutes on each side.

3) Summer smoothie time!: Usually, people like you and I are left to our own devices when it comes to smoothies. We blend away in our kitchens using coconut milk yogurt, almond milk, etc. so we know our smoothies are safe from the co-mingling of evil casein particles. It’s a fine practice, and one we’ve grown accustomed to, but there’s also nothing quite like sipping a delicious smoothie which you didn’t have to create. This is especially true when you’ve just had oral surgery (which also happened to me this May); have no fear: Smoothie King is here! They now have a line of gluten-free, vegan smoothies!!! (erupt in applause here!) I’ve had both the Dark Chocolate Banana and Nutty Super Grain varieties, and I literally debate every time about which to choose because they’re both SO AMAZING!! I actually lived off the Nutty Super Grain for 3 days that week until I regained used of my mouth. One important caveat: you have to tell the smoothie maker about your allergies. You may notice when they’re busy, they quickly rinse the blenders between runs…not enough to eliminate milk traces, or even protein powder. If you tell them, they’ll use a dairy-free blender (if they have one at their location) or they’ll deep clean it for you. Now, find the nearest Smoothie King and start driving!

Now, I’d say these are enough tips to digest for now…and I’m off to finalize details for tomorrow’s assembly line lesson/toy showcase. The life of a teacher is never dull, even in the summer. I promise to write again sooner than later, and to offer some tips on allergen-free event planning. Until then, I wish you a summer of delicious food, good health, and memories to last a lifetime!

What are you looking for?

Spotted at @bjswholesale: a 5 lb. bag of @kingarthurflour measure-for-measure gluten-free flour for $8.99!! (THAT’S $1.80/lb. which is by far the cheapest I have found!) Time to stock up! 😉🍞🧁 ❤️ #certifiedglutenfree #kingarthurflour #glutenfreedeals #thanksBJs #allthebaking #celiaclife #itsthelittlethings
Not to be a downer as we head into the holiday weekend, but we’re also at the start of cold/flu season and holiday gatherings and travel are prime time for germ-sharing. It’s important to do your homework in finding safe-for-you medicines. My latest post is up with some information I’ve found in my search. (This is in the post but I am not a medical professional, just sharing some research I did so you can be informed and talk to your doctor about what is best for you!) The time to stock that medicine cabinet is now! #coldandfluseason #Celiaclife #glutenfreelife #glutenfreecoldmedicine #alwayschecklabels #alwaysdoublecheck #stockupnow #thankyourselflater